I’ve gotten a lot of great gaming sessions in these past few months. Consequently, there’s a long backlog building up of games that I haven’t quite had time to review in the usual full-length format. I’ll get around to some of these when the time is right, but for now, here are some brief thoughts on what I’ve been playing lately:

A lot of my gaming these past few months has revolves around three outstanding legacy (aka campaign) games. All three of these games will receive a full scale review, but not until the campaign is finished. 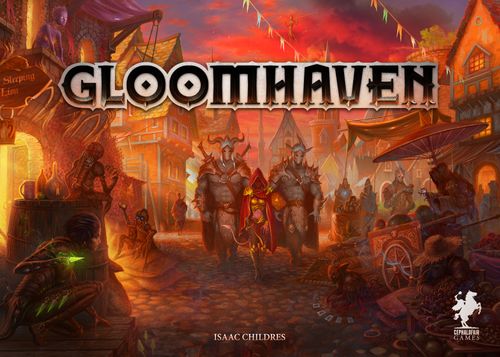 Around the holidays I played a lot of Gloomhaven with my brother. If you want a dungeon crawling board game experience, there’s no better option out there. Isaac Childres has built a fantastic set of mechanics, but even more importantly he’s created an incredible world to explore. Gloomhaven is so addictive that if I lived closer to my brother I probably wouldn’t have played many other games these past two months. Except for…

Season 1 of Pandemic Legacy still rates as arguably my favorite gaming experience of all time, but Season 2 is legitimately making a run for that title. Our group is currently up to June in the campaign, and we’ve already had a number of nail-biting finishes, including two that have come down to the final card drawn. I love the exploration aspect of Season 2, with a wealth of content to unlock at whatever pace you dare to choose (though it must be balanced with addressing the ever present threat of global pandemic). Following up a classic with an equally great sequel seems a tall ask, and in that regard I’m very impressed so far with what Matt Leacock and Rob Daviau have accomplished.

I’m writing about each play session in our PLS2 campaign from the perspective of our characters, and posting them here on a monthly basis — if you’d like to read along, be sure to check out the Haven Journals feature.

I’m only two games into Charterstone, in which I’m playing a two player campaign with my wife. I’ve heard that Charterstone is best with the full 6 players, but with everything else on our schedule it seemed too daunting to organize another big group that could meet with any regularity. Plus, I’m always looking for games that my wife and I can enjoy together, and this is the first legacy game I’ve gotten her to play with me. With just a one hour play time, it’s easy to get a quick game in on a weeknight. Being only two games in, the jury is still out on this one. Particularly, it’s too early to tell whether the balancing mechanics are strong enough to prevent a runaway leader problem that other competitive legacy games have also faced (ahem… Seafall).

The cold and dreary weather this time of year lends itself quite well to the occasional Saturday of all-day gaming. Both of these games were surely epic… but I haven’t gotten around to writing a full length review about either of them… yet.

I got this game for my birthday, and played through the entire three-scenario core set in a single day. I did not include it in the ‘campaign’ section above for two reasons. First, if you can play through a game in one day, it’s not a campaign. Second, I’m not sure this one warrants a full-scale review. At least, not a positive one.

The mini-campaign had its fun moments, but ultimately it felt like a poor man’s Mansions of Madness (2nd edition). Both are set in the same universe, and involve players cooperating to pass enough ‘skill checks’ to overcome the powers of darkness and really just survive with their sanity still in tact. Sure, they involve different components. Mansions of Madness gives you premium miniatures, modular boards, and a fully integrated companion app, while Arkham Horror TCG gives you…. cards. Just cards.

My biggest gripe about Arkham Horror TCG though is that for a punishingly difficult game, there is far too much luck involved. I love a good challenge, but I like to feel like I have some semblance of agency. Again, Mansions of Madness does this better.

There are expansions to Arkham Horror TCG that offer more scenarios, and more cards to customize your deck with… but I’m not sure why you’d sink more money into this rather than just buying Mansions of Madness. By the way, anyone want to buy my lightly used copy of Arkham Horror TCG?

I do a monthly gaming group with some friends, and in January the group voted to play Game of Thrones… on a WEEKNIGHT. That obviously wasn’t going to happen, so we blocked off a weekend day in February. I pulled out all the stops for this one, sending out thematic emails and rules primers ahead of time, cooking a big brunch, and even awarding a custom trophy (read: youth soccer participation trophy plus duct tape) to the victor. It was truly an epic and enjoyable day of gaming with some great friends. In terms of the game itself though… I’m not sure I’d recommend it as a purchase to the average gamer. With a length of AT LEAST 5 hours unless you’re all veterans, and a requirement of exactly 6 players in order for the game to really shine, you’ll be lucky to get this game to the table once in a year.

Am I glad I played it? Yes. Do I think I’ll likely organize another Game of Thrones day at some point? Maybe when George R.R. Martin releases Winds of Winter…