Today we’re taking a look at one of the oldest games on the BGG Top 100, predating 96 of the other games on the current list. Released back in 1996, Tigris and Euphrates was once ranked #1 overall. Over the years it has dropped to #60, but it has stood the test of time better than nearly all of its contemporaries. Consider Catan (1995) for example — it is currently ranked #244. Only El Grande (1997) has held up slightly better, hanging on to the last spot in the Top 50.

I haven’t yet tracked down a copy of El Grande, so that review will have to wait for another day. But I have played quite a bit of Tigris and Euphrates recently, and I can see why this game is considered a true classic. It’s not just “good for 1996”, as one might regard some other relics from before board gaming’s golden age. It is good – period.

The Dawn of Civilization

Tigris and Euphrates is a brilliantly strategic game of kingdom building, set in the birthplace of civilization. The goal of the game is to develop a strong yet balanced empire. Points are scored in four spheres of influence – Kings, Priests, Traders, and Farmers. A player’s final score is simply determined as their lowest point total among the four spheres. 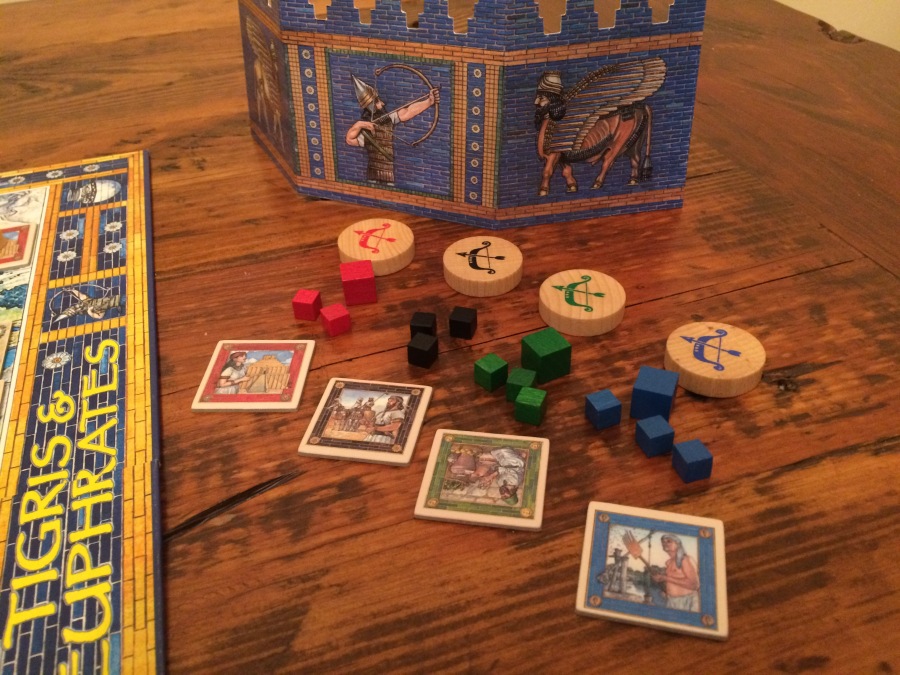 At the start of the game, the fertile crescent formed by the Tigris and Euphrates rivers is mostly undisturbed by human settlement, with just ten temples littering the vast landscape. Meanwhile, each player starts out with four leaders, one from each of the four spheres of influence. They also have a perpetual hand of six follower tiles, which are also color-coded to correspond to the four spheres of influence.

By placing leaders next to temples and adding same-colored followers to contiguous spaces, players can form powerful kingdoms and even awe-inspiring monuments, earning many victory points in the process. Multiple leaders (from one player or several) can coexist in harmony in a single kingdom, as long as that kingdom does not contain more than one leader of each type.

Therein lies the primary source of conflict and strategy in Tigris and Euphrates. As kingdoms grow in various regions across the board, some will inevitably become more rich and powerful than others. When that happens, everybody wants a piece of the action.

There are two ways to depose a like-colored leader: insurrection and conquest. To spark an internal conflict, a player must simply place a leader into a kingdom where a like-colored leader already exists. The usurper petitions the temples within the kingdom for favor, adding ‘priest’ followers from his own hand for additional support. The incumbent answers back with support of her own, at which time the priests choose which ruler stays and which is evicted.

External conflict can be a bit messier – it happens when two kingdoms grow so large that their borders adjoin. Before the two kingdoms can unite as one, any like-colored leaders must fight for power. These battles are decided by the leaders’ like-colored supporters, adding any from their own hand. The loser must remove their leader as well as all of their like-colored supporters from their half of the unifying kingdom. This process can sometimes repeat multiple times if there are more than one pair of like-colored leaders at odds. Depending on the amount and placement of fallen leaders and followers, an external conflict can result in two reeling and fragmented kingdoms just as often as it yields a single prosperous and united victor.

Kingdoms continue to rise and fall as play continues, until the bag of follower tiles is exhausted or enough of the original temples have been connected, thereby bringing civilization to all of Mesopotamia. In the end, players are each measured by their own weakest sphere of influence, awarding victory to the player with the highest score in that area.

Standing the Test of Time

If not for Tigris and Euphrates’ high ranking on the BGG list, I might never have given it a chance. The box art is somewhat bland (my copy is from a 2003 print run), and the rule book does not appear much more inviting upon first glance. However, while I can’t really call a former BGG #1 game a “diamond in the rough”, I was so pleasantly surprised when I finally tried this one out. I had a blast learning it, and proceeded to play it three more times in that same week.  Even the artwork has grown on me – it has a nice consistency among all the components and fits the theme well. And while the rulebook is verbose, it has a ton of detailed examples and leaves nothing in question.

In terms of the gameplay, I absolutely love the tension and balance created by the conflict system. It’s nearly impossible to craft an invincible seat of power while also surrounding yourself with great riches – as you expand and build monuments, you inevitably expose weaknesses that others can exploit through insurrection or conquest. So there’s this delightful tightrope act that one must walk to find just the right balance between wealth and power.

And as if your grasp of power wasn’t already tenuous enough, each player gets two “catastrophe” tiles that may be played during the game, covering a follower or empty space and making that space permanently unusable. When played right, these tiles can fracture or severely handicap a kingdom, suddenly opening a path for a usurper even where none had existed.

Tigris and Euphrates is one of those games that seems to have a knack for ending in a crescendo, with an epic external conflict or a brilliantly timed revolution. While this doesn’t always happen on the very last turn, in my experience I’ve found that there’s always been some moment towards the end of the game that can be pointed to as the tipping point, and it’s close enough to the conclusion where there’s very little time for a victory march of any sort. I find that it’s a thoroughly enjoyable experience whether I win or lose, and I love games with epic moments whether they end up going in my favor or someone else’s.

To me, that’s exactly why Tigris and Euphrates has stood the test of time. It’s a heavily strategic game with virtually zero luck involved, yet it is balanced enough that the victor rarely has a chance to rest on her laurels. While the best player usually wins, it’s not easy to hold the lead, which often results in an underdog having a chance and maybe, just maybe, being able to capitalize on it with a clever play at the right moment. Simply outstanding design work – for the type of game it is, I don’t think it has been bested in its 21 years of existence. If you like strategic games and don’t mind a little conflict and player interaction, you’ve absolutely got to check this one out.

One thought on “Review: Tigris and Euphrates”