A couple of weeks ago, I finished my campaign of Seafall, an epic game of exploration on the high seas for 3-5 players. If you’re not familiar with Seafall or the concept of campaign (or ‘Legacy’) games, it is played over a number of sessions, as players make permanent changes to the game and the story hurtles towards a permanent and unique ending. This genre is relatively new in the sector of mass produced board games (though RPGs have been using many of these concepts for decades), and Seafall was met with great anticipation leading up to its 2016 release.

It had been 3+ years in the making for Rob Daviau, the creator of the Legacy board game concept and co-designer of BGG #1 mega-hit Pandemic Legacy. Seafall was more ambitious in scope than either of Daviau’s first two Legacy titles (Risk Legacy and Pandemic Legacy), and it was built from scratch rather than giving the Legacy treatment to an existing game. The first few commercial copies were snatched up so quickly at GenCon 2016 that anyone without a press pass had little hope of acquiring one.

But as the initial reviews came trickling in, excitement was replaced with worry and disappointment. The general consensus was that while Seafall was an ambitious and groundbreaking design, it was also deeply flawed and just not that much fun. As someone who had pre-ordered a copy of Seafall and talked a group of four friends into playing it, I was torn over whether to just eat the $80 and play something else. After much deliberation, I talked myself into going forward with the campaign, wondering if the early reviewers’ opinions were affected by the breakneck pace at which they rushed through a game that was meant to be savored.

Since October 2016, four friends and I have gotten together about once a month to play Seafall. Through the prologue and our first seven games, we wrote names on islands and advisors, opened 5 boxes of new content, placed stickers, and permanently destroyed cards by ripping them into pieces. By the eighth game, momentum was fading and one member of our group was preparing to move to Nashville. Rather than play on without him, we decided to stage an epic finale, ignoring the score and just playing until the sixth and final box could be opened.

Upon opening that final box, the unanimous feeling was one of being underwhelmed, and relieved to be done. Personally, I felt embarrassed for coaxing my friends into devoting 40+ hours of time to a game that was clearly not sufficiently playtested. Sure, there were some very exciting moments scattered in, especially in our first 3-4 games. And don’t get me wrong, I always enjoy getting together with these friends for some gaming. But I would have much rather spent that time playing a better campaign game like Gloomhaven or Mechs vs Minions, or just trying a different new game each month. If you have unlimited free time, or you want to open all the boxes and study some inventive game design elements that may serve as building blocks for a fantastic game in the future – then by all means, go for it. Otherwise, this game should be a hard pass.

So now that I’ve given a spoiler free overview and summary of my thoughts, I’d like to discuss the specific ways I think Seafall could be improved. I won’t hold back from the spoilers here, so if you think there’s any chance you might play Seafall in the future, stop reading now. I repeat:

HERE THERE BE SPOILERS. PROCEED AT YOUR OWN RISK.

With Seafall being a competitive Legacy game where you play as the same faction through the entire campaign, I can understand the concern that players who fall behind early might get discouraged that they have no hope of catching up. But in trying to provide catch-up mechanisms, Seafall ended up actually making the game imbalanced and full of frustrating experiences.

I think that the biggest mistake of all was to make players discard all buildings, ship upgrades, money, and treasure at the end of each game. With games often ending quickly and abruptly (regularly 5-7 turns, in our experience), this essentially makes the merchant and builder strategies exercises in futility. I’ve got to believe that this was a decision made midstream, because some buildings and structures don’t even make sense when you can’t carry them over from one game to the next (case in point: the Bank).

Once tombs are unlocked, the exploration strategy becomes permanently overpowered. Not only can you keep research cards from game to game, but you also become able to keep relics and tablets. Furthermore, the chunks of glory earned for exploring tombs are enormous, and sometimes compounded by milestones.

So exploration seems to be the only sustainable strategy in the end — and that’s fine. But if buildings and upgrades persisted from game to game, it would add strategic depth, as there would be actual value in building your engine before heading out to explore. With temporary buildings and upgrades, if you build any more than one of them as you rush out to the nearest tomb site, it’s most likely a waste of time and resources. 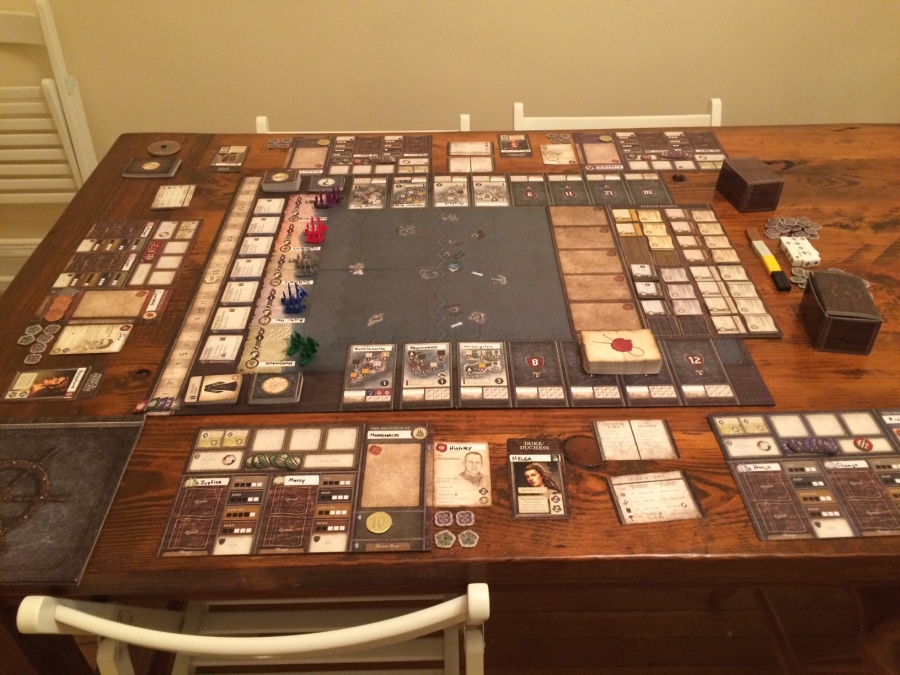 Furthermore, permanent buildings and upgrades would have given players more power to reel in a runaway leader through raiding. This would allow for the removal of the rubber-banding mechanisms that ultimately don’t work anyway (game-end discarding and starting bonuses), letting players wage war if they care about competitive scores, or just play peacefully and be happy with their own successes. As it is, the rubber-banding mechanisms just serve to make players more cognizant of how far behind they are without doing much to actually help them narrow that gap.

I understand that there may have been unforeseen problems found in playtesting that led Rob Daviau and his team to make buildings and structures temporary. For instance, perhaps one shrewd player got the best  buildings and upgrades early on, and then benefited from them for the rest of the campaign. Or maybe players found it too devastating to meticulously build up an ideal ship over multiple games only to lose it to a single powerful raid or an endeavor gone horribly wrong. However, when such an issue inevitably came up, I don’t believe the right decision was to make such a drastic change. Small tweaks, such as adjusting the costs or effects of individual buildings or upgrades, should have been considered first.

Secondarily, I think the length of the campaign should have been reduced. After the fifth box is opened, the available actions come to feel a bit repetitive. While it’s tempting to pack in as many good ideas as possible, more is not always better. I could have done with about 5 fewer islands and less than half of the advisors. A protracted campaign would have also reduced the concerns over a runaway leader problem.

In the end, the makers of Seafall could have learned from the lessons told by the game’s own story. Like the leaders of the provinces, they became blinded by the pursuit of glory, and their ambition became their downfall.