Imagine waking up to find yourself washed ashore on a mysterious island. Though much of the terrain is yet unexplored, one thing is for sure– you’re not going to find a five star resort here. Between the harsh weather, fearsome wildlife, and minimal resources, survival is far from a given. You’ll need your wit, skills, and more than a little luck to make it through. Welcome to Robinson Crusoe.

Robinson Crusoe: Adventures on the Cursed Island is an adventure game in tabletop form, for 1-4 players. It’s actually reminiscent of classic old computer games in the adventure genre, where players must explore, gather resources, and use those resources to solve various problems. For me, it scratches the same itch as the King’s Quest series. The allure of it, versus a computer game, is that you can understand, control, and touch the beautiful gears that make this engine churn.

To give you a general idea of what the game might entail, here’s an overview of the first scenario. You find yourself shipwrecked on an island and in order to be rescued you must build a signal fire. You’ll need to collect wood to build the fire, but in the meantime you’ve also got to worry about food and shelter. You’re able to explore, gather resources, build inventions, and fight beasts — but these actions take time and you risk injury or other misfortune if you’re not adequately prepared. Ultimately, it’s a race against the clock as you struggle to signal your rescuers before the harsh winter comes and snuffs out your flame, along with your last hope of survival.

If that doesn’t sound awesome, then you’re probably not a fan of adventure games. Personally, I love this genre. But until Robinson Crusoe, I had always considered adventure games to be better suited to electronic platforms. Let’s take a closer look to see whether Robinson Crusoe was able to change my mind.

Soaking up the Sun

Robinson Crusoe gets major points in my book for being groundbreaking and unique. At the time of its publication in 2012, no other board game had encompassed the adventure genre quite so well. The game comes with six detailed scenarios to choose from, covering a wide range of adventure motifs. Bits of Castaway, The Swiss Family Robinson, and even Indiana Jones are clearly present in the scenarios, providing players some solid variety from which to choose. There’s also been some fantastic bonus content released by designer Ignacy Trzewizcek, including a 7th scenario based on King Kong.

Along with the starting scenario, there are over 200 cards providing flavor text triggered by actions and turn-based events. These cards help craft a unique narrative each time you play, and keep you on your toes wondering what obstacles may be just around the bend.

For those who relish a real challenge, Robinson Crusoe will not underwhelm. The base difficulty in this game gives players a bleak hope of survival, and achieving victory certainly feels sweet on the rare occasion that it happens. It’s also pretty easy to adjust the starting difficulty down by adding helpers (‘Friday’ and/or ‘Dog’) or giving players more starting items. The rule book doesn’t really offer any advice on how to make the game more difficult, which further indicates how hard this game normally is.

Presentation quality is certainly important for any modern board game, and Robinson Crusoe does not disappoint in this department. The art design exhibits excellent quality and detail, and for a game with so many moving parts, the board does an excellent job of clearly organizing everything. The content of the flavor text is also top notch — it’s all wonderfully thematic and creative, and there’s so much variety in the associated effects on gameplay. You can certainly tell that a ton of work went into this game, and I consider it a great achievement in game design. 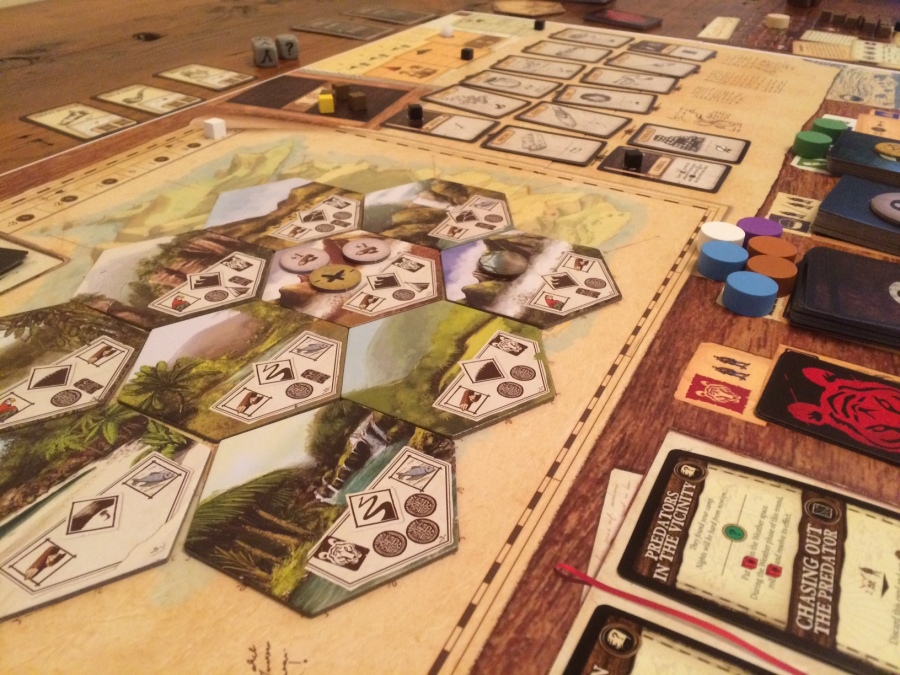 In Retrospect, I Really Could Have Used Some SPF 30

Despite the above praise, translating the adventure genre into tabletop form does clearly have its challenges. While it’s cool to see all the nuts and bolts, the amount of moving pieces in this game can be cumbersome. For one thing, it’s time consuming — I’ve found that a game of Robinson Crusoe generally takes upwards of three hours. That’s not a deal breaker for many people, myself included – but for game that I invest so much time in, I want a bigger payoff at the end than a binary “you won” or “you lost”. The storytelling aspect is strong at the outset and throughout the gameplay, but at the very end it’s non-existent. I think Robinson Crusoe could take a cue from roleplaying games, offering story prompts at the end based on different tiers of performance. A strong performance that falls just short of victory shouldn’t feel exactly the same as a blowout loss. Similarly, a narrow victory is thrilling, but a decisive victory can lack tension in the closing moments.

Another thing about all the moving parts: it’s very easy to lose track of what needs to be done. With a myriad of cubes, tokens, markers, chips and other assorted doodads, it felt like a chore to be constantly moving things around. I get why it’s necessary given the desired complexity of the design, but it just ended up feeling a bit too fiddly and taking away from the enjoyment of the adventure.

When comparing Robinson Crusoe to a computer game, it also hurts to not be able to ‘save’ your game (either to take a break in the middle, or to be able to revert back to a checkpoint rather than starting over entirely). You may laugh at the idea, but some recent board games including Time Stories and The 7th Continent do boast some pretty ingenious ‘save’ features.

Don’t get me wrong, I think that Robinson Crusoe is an impressive achievement, and an important study for anyone who is passionate about game design. It’s been a longtime member of the BoardGameGeek Top 25 for a reason. But did I enjoy playing it enough to put my recommendation behind it? No. For me, it captures the adventure genre about as well as any board game I’ve played, but its weaknesses compared to its electronic counterparts outweigh its strengths. And that’s coming from someone who really loves board games.

On the bright side, the designer of Robinson Crusoe has recently produced a new title in the same genre, called First Martians: Adventures on the Red Planet. It has not yet been released and I haven’t played it, but from the available information it looks quite promising. It incorporates a slick looking app, and I have high hopes that it will retain Robinson Crusoe‘s positive features while shedding the negatives. Plus the Mars theme is awesome. If you like adventure games, be sure to keep an eye out for this one when it hits shelves around late Summer 2017– definitely one of my most anticipated titles this year.

Thanks for reading this post! If you want to receive updates when new content is posted, I invite you to follow my blog in any of these ways: