I’ve long been a doubter of wargames, and I’m not sure exactly why. Maybe it has to do with the fact that I’ve never been much into history, strongly preferring fiction to non-fiction. Perhaps my experiences playing Risk as a kid inaccurately shaped my opinion of what a wargame might entail.

Whatever the reason, I must admit that for a long time I assumed that Twilight Struggle was probably overrated on the BGG Top 100 rankings (without ever having actually played it to see for myself). Having been published in 2005, the Cold War themed Twilight Struggle spent a long time at the #1 spot until it was finally dethroned by Pandemic Legacy on January 1, 2016. It still sits firmly in the top three to this day. I felt sure that widely loved classics just behind it, like Agricola and Puerto Rico, were more deserving of the top spot, while Twilight Struggle was simply boosted by votes from a niche demographic of gamers.

So when I was presented with the opportunity to play Twilight Struggle, I was very excited to see what all the fuss is about, once and for all. Doubly exciting was the fact that I would be playing it with my friend Ryan, a history buff who considers Twilight Struggle to be his favorite game. Would Twilight Struggle be able to win me over?

Leading up to Twilight Struggle, I felt that it was important to do my research ahead of time. Partially because learning a game of this complexity from scratch and playing it on a single weeknight seemed like it would be ill-advised. But also partially because of how badly I got beaten in Go the previous week after going in unprepared.

Twilight Struggle is lighter than some wargames in terms of duration, but it’s still quite heavy compared to the average game. There’s a steep initial learning curve, with a deck of approximately 110 cards that each have a unique ability. Even once you’re familiar with the rules and the various cards, a full game can take 2-3 hours. 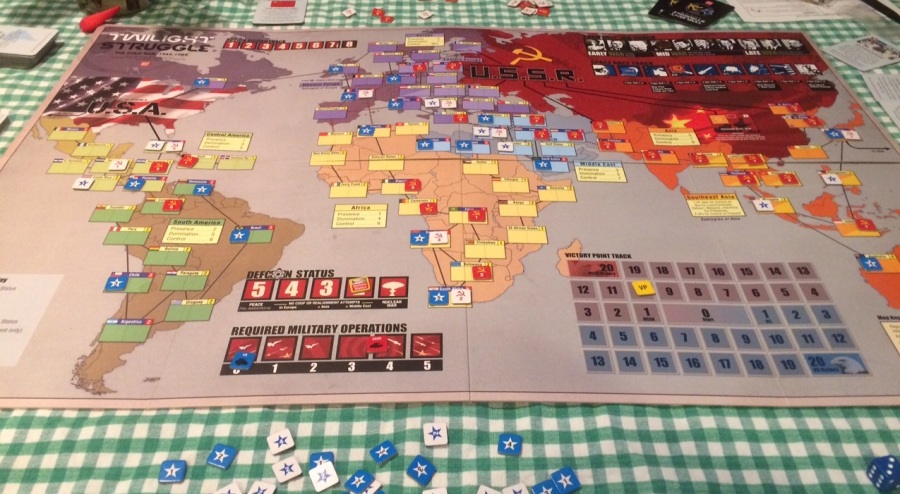 To give you a brief synopsis of gameplay: Two players face off as US and the USSR during the period of the Cold War, from 1945-1989. Both nations have the goal of spreading their influence across the globe and controlling key battleground countries. To do so, every round players draw a hand of cards and take turns playing them, each of which has a Military Operations (“Ops”) value and an Event.

Ops can be used to place influence, realign (roll to remove enemy influence), or attempt a coup (roll to remove enemy influence and add one’s own influence). Coups certainly sound the most powerful of the bunch — and they are — but of course there’s a catch. Each time a coup occurs in a battleground country, the DEFCON level spirals one step closer to global thermonuclear war. If DEFCON reaches level 1 during a player’s turn, that player immediately loses.

Each card’s unique Event reflects a significant person or event from the Cold War– some Events help the Soviets, some help the Americans, and some can help either player. When playing a card, players must choose whether to use the Ops or the Event, but there’s one important catch. If a card’s event helps your opponent, you must use the Ops and the Event. 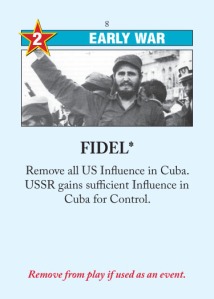 Forcing players to use their enemy’s Events is a brutal rule, but it’s also part of what adds a palpable tension to Twilight Struggle. While it is occasionally possible to dispose of a card without playing it at all, you’ll inevitably face some rounds where you know you’re going to have to play a card you really don’t want to. Ultimately, the goal is to weather the storm in those rounds and survive long enough for the tide to turn back in your favor.

There are many additional wrinkles, including regional scoring, the Space Race, and “headline” cards – but I’ll move on before your eyes start to glaze over. If you want to know more about the rules, I’d highly recommend the blog Twilight Strategy. Yes, that’s a blog dedicated solely to discussing the strategy of Twilight Struggle.

The Struggle is for Real

So, how did my initial skepticism fare against Twilight Struggle? Honestly, I thoroughly enjoyed playing this game. For one thing, it was really interesting playing through it with Ryan, who often stopped to provide color commentary about various historical events portrayed in the game. Along with the constant pressure as both powers teetered on the brink of thermonuclear war, I felt that it made for a wonderfully immersive journey through the Cold War era.

To my surprise, I actually got off to an early lead as the USA, even though USSR tends to have the advantage in the Early War. Ryan did pull back into the lead by the Mid War, and deservedly defeated me just before the Late War, when USA’s real advantage kicks in. Overall though, I felt that I played pretty well for a first-timer against a much better player. Ryan might disagree, but I think that with a couple more games and some favorable draws I could come away with a victory.

Going in, I was worried that the game would be a really good history lesson with the mechanics being more of an afterthought. That assumption couldn’t have been more wrong. The designers did a masterful job of weaving the mechanics seamlessly into the theme, creating a final product that is greater than the sum of its parts. Along with their talent for game design, their knowledge of the historical subject matter really showed through in the details.

As you can probably guess by this point in my review, I definitely recommend Twilight Struggle, and I can see why it sits so high in the BGG Top 100. Personally it’s given me a lot more appreciation for wargames as a genre, and I’d now be much more open to trying another one… or just playing Twilight Struggle again!

There are a couple of important caveats. As I alluded to earlier, I studied up considerably on the rules beforehand. I don’t think the first playthrough would have been nearly as enjoyable if I had gone in cold. So if you’re not willing to put in some time on the front end to understand the rules, or endure a couple of tough games as you climb the learning curve, this might not be the game for you.

Secondly, as a game that is quite heavy, it’s certainly not going to be everyone’s cup of tea. If you’re new to gaming as a hobby, you may feel the need to work your way up through lighter and medium-weight games before you’re ready to dive into a game like Twilight Struggle. But if you do have the time and energy for it, I can say without hesitation that I believe you’ll be glad you gave it a try.

Thanks for reading this post! If you enjoyed it, I hope you’ll follow my blog via social media:

And just in case you’ve decided you want to add Twilight Struggle to your game collection, I’ve provided an Amazon link. A small portion of the proceeds will go to support this site.