I’ve always loved getting immersed in a good mystery. As I’m reading, watching, or listening, I can’t help but step into the shoes of the detective and see if I can solve it myself. Of course, it’s not quite like being the actual detective — you can’t choose which leads to follow, which evidence to examine more closely.

But what if such a story existed– where you DO have the power to control the lead investigator? What if you were given a map, a directory, a newspaper, and a brief introduction to the case — and could just take the investigation in whatever direction you please? Better yet, what if this story took place in the world of the great Sherlock Holmes? Well, my fellow sleuths, you may have deduced the following from the title of this review and the image at the top of the page: such a story DOES exist, in the form of a board game. Step on into 221B Baker St with me and I’ll introduce you to Sherlock Holmes: Consulting Detective.

When looking at the BGG Top 100 list, this game jumped out at me. Partially because I’ve always enjoyed all things Sherlock, but also because of how old this game is compared to most other games on the list. It’s one of only three games on the list older than I am: the others are the ancient classic Go (~2200 BC), and a nineteenth century dexterity game called Crokinole (1876). 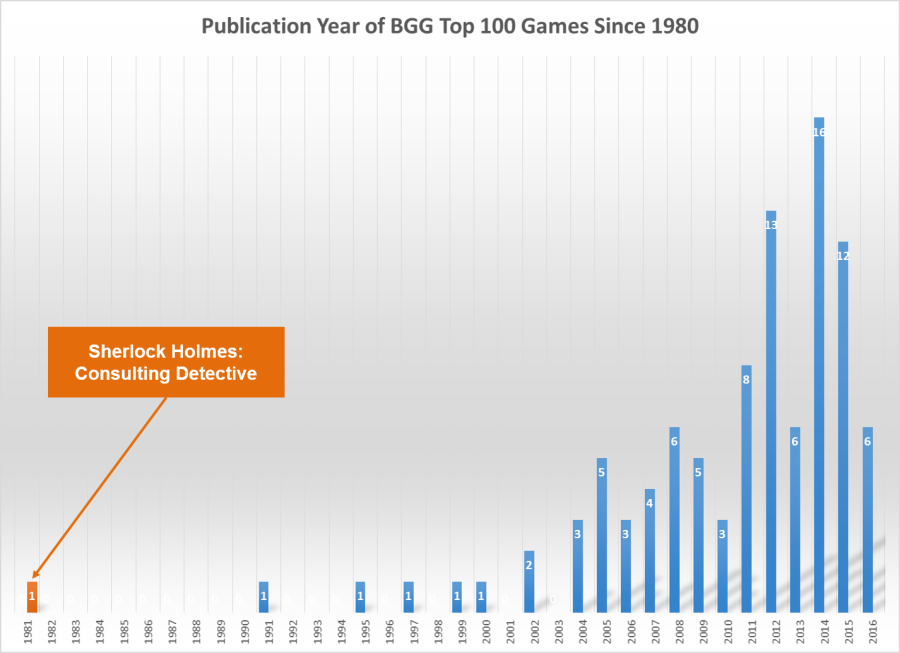 As you can see from the above chart, the ’80s were about as good for board gaming as they were for music. Originally published in 1981, SH:CD is a full ten years older than the next game on the list, and has at least 2 decades on over 90% of the list. A French remastered version was printed in 2011 by Ystari Games, and an English translation followed in 2012. Same stories, but with higher quality components (and a few minor translation errors).

So, now that I’ve gone off on a bit of a tangent and spent way too much time creating a chart, let’s talk about how the game actually works. It’s elementary really, my dear Watson (sorry, I just had to put that in at some point). The game is played cooperatively with as many as 8 people — or as few as 1, if you’re feeling reclusive like the game’s namesake. You pick a scenario, open that booklet and read the introduction, and then choose which lead you want to follow. There is a directory and a map with corresponding entry numbers, so if you know a name or a location, you can find and read its entry in the scenario booklet.

There are upwards of 100 entries for each scenario, but most are red herrings or superfluous information. If you choose your leads wisely, you can often solve a case after reading ten entries or less. When you’re ready to solve, you turn to the back of the booklet and fill out a short questionnaire. You’re then scored for your correct answers, and your score is adjusted based on how many leads you followed compared to Holmes himself. If you beat Sherlock’s score, you get an imaginary pat on the back! It is possible to solve the mystery correctly without beating the master, in which case justice is still served but no back-pats are distributed.

This game is great for people who don’t like long rules explanations, as there is virtually no learning curve. Do you know how to read? Great, you’re ready to play! Also, the mysteries hit that sweet spot of being challenging enough that you’re legitimately proud when you solve them, but also not so obscure that you’re left asking, “Oh come on, how would anyone ever make that connection?!”

Do you know how to read? Great, you’re ready to play!

Having played three scenarios so far — two with different groups of friends, and one with my wife — I definitely am glad I came across what I consider to be a bit of a hidden gem among the BGG Top 100. I would definitely recommend Sherlock Holmes: Consulting Detective, especially to anyone who loves mysteries and/or heavily thematic games.

What’s your favorite thematic game? What game would you like to see me review next? Leave a comment below, or check out the Top of the Table on social media!

If you’d like to purchase a copy of Sherlock Holmes Consulting Detective or the new Jack the Ripper & West End Adventures stand-alone expansion and you use these Amazon links, a portion of the proceeds will help support this site. Thanks!